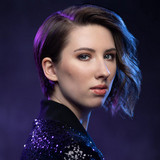 MICHELLE CREBER is an award-winning singer, songwriter, musician, actor, dancer and voiceover artist. In May of 2020, Michelle released her 7th album, STORM, to great industry acclaim. The digital album has sold and streamed in over 110 countries on six continents. In Canada, STORM has placed on a variety of charts including #21 on Current Digital Albums, #12 on Independent Albums and #47 on Top Current Albums. In the USA, the title track and single ‘Storm’ made the Top 40 of U.S. Media Base radio charts, and #71 on Billboard’s Current Pop Albums charts. Michelle’s previous album, ON DISPLAY (2018), sold and streamed in over 130 countries, and earned top 100 placement on the US Billboard charts. Michelle is a dynamic and exciting performer with incredible stage presence and a wealth of experience that defies her young age. She has performed her music in concerts in major cities throughout the US as well as Canada, Germany, Poland, Thailand, Australia and the UK. As a session singer, Michelle has recorded vocals on the soundtracks for many TV shows and movies. Lead singing features include the theme song for NBCs Nina’s World; several songs during nine seasons of the hit animated series My Little Pony Friendship Is Magic (Discovery Family); multiple songs on Nintendo's popular franchise Yo-Kai Watch; singing for Alice on Martha Speaks (PBS); 3 Hasbro albums; and a soundtrack duet with Billy Joel for the movie Just the Way You Are.