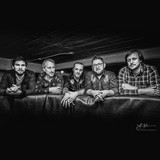 From Lawrence, KS by way of Ireland, Carswell & Hope bring vintage rock sounds and sensibilities together with big harmonies, carefully crafted textures and inventive songwriting. Carswell & Hope were formed in 2012 when Irishman Nick Carswell arrived in Lawrence, Kansas with guitar in hand. He found Jason Slote (drums), Austin Quick (bass/keys) and Jordan Tucker (guitar) and they released their debut LP A Hunger in 2014, accompanied by an Irish tour. Since then, Ryan McCall has completed the line-up on keys, and C&H have built a following in the US Midwest, sharing bills with Mayer Hawthorne, The Mowglis, Glenn Tilbrook (of Squeeze) and Mundy (IRL). 2018’s Exit Plan EP release was followed by the 2019 single On My Way, with accompanying crowd-sourced music video created by fan-submitted footage from all around the world. Carswell & Hope offer an eclectic blend of singer-songwriter, alt-rock, electronica and psychedelic, with spacious and delicate arrangements set amongst big rock sounds and rich vocal harmonies.