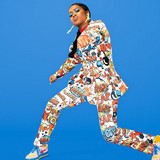 Tierra Whack is a Philadelphia native whose theatrical, undeniably unique take on contemporary rap and R&B has received widespread acclaim. Her debut album, 2018's Whack World, consisted of 15 minute-long tunes, rapidly shifting in mood from playful to introspective to irritated. Whack began writing poetry as a child. She started rapping as a teenager, initially going by the name Dizzle Dizz. A 2011 freestyle video produced by Philadelphia underground music collective We Run the Streets earned her an audience, and she began releasing songs online and performing around Philadelphia. However, she wasn't satisfied with her work, and was having trouble developing an individual style. Her family moved to Atlanta so she could finish high school. Upon returning to Philadelphia in 2015, Whack (now going by her real name) reconnected with an acquaintance from her teenage years, engineer and producer Kenete Simms, and the two began working on music together. She released several singles in 2017, including "Child Please" and "Mumbo Jumbo," seemingly a satire of mumble rap. In 2018, she released Whack World, her debut full-length. Presented as a visual album with music videos for each of its 15 tracks, the release was a major critical success. Whack subsequently opened for her self-acknowledged idol Lauryn Hill in Philadelphia and later toured across the world with 6LACK. 2019 brought a bevy of singles including "Only Child," "Wasteland," and "Unemployed." ~ Paul Simpson