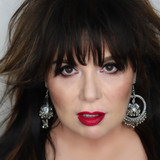 Widely regarded as one of the greatest voices in the history of rock ‘n’ roll, Ann Wilson is a true icon, known far and wide as to lead singer and songwriter of the groundbreaking rock band Heart. Led by Wilson’s extraordinary vocal power, Heart has thrilled audiences for over four decades, earning sales of more than 35 million and well-deserved induction into the Rock and Roll Hall of Fame in 2013. Indeed, as the lead singer of the first female-fronted superstar hard rock band, Wilson blazed a trail for generations of women to come, while her songs – including “Barracuda,” “Crazy On You,”

and “Magic Man,” to name but a few – have become part of the very fabric of popular culture. Wilson made her stellar solo debut with 2007’s HOPE & GLORY, showcasing inventive covers of songs that inspired her own artistry alongside guest appearances from such friends and fans as Elton John, k.d. lang, Alison Krauss, Wynonna Judd, Shawn Colvin, and Rufus Wainwright. Her critically acclaimed second solo album, 2018’s IMMORTAL, saw her teaming with Heart producer Mike Flicker to put her unique stamp on songs made famous by David Bowie, Leonard Cohen, Tom Petty, Amy Winehouse, and more. A series of remarkable single releases have followed, including “The Revolution Starts Now” and Wilson’s own mighty soul ballad, “Tender Heart,” earning applause from such high-profile media outlets as Rolling Stone, American Songwriter, Goldmine, “The Hammer” and “Black Wing” was also released shortly after.