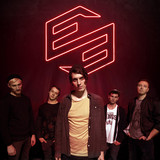 Everase - ukranian rock band formed in 2019. The group consists of lead vocalist Artem Yakovlev, guitarist Andriy Kovalyov, guitarist Andriy Dyolog, bassist Andriy Stepanov and drummer Vyacheslav Tilik. On June 20, EVERASE released their debut album "GO FOR BROKE". It features 11 tracks performed in a mix of Post-Hardcore, Alternative Rock, Metalcore genres. "The lyrics on the album have a motivational message, based on our inner experiences, worldview, and elements of fiction. The themes of the songs are different, so everyone can relate”, - the band members emphasize. Work on the album lasted the whole year. The inspiration for its creation was a desire to share their music with listeners. “GO FOR BROKE album will fill you with energy, inspire you, make you feel and think”, -

EVERASE said about the debut album.