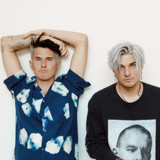 Multi-platinum, GRAMMY nominated artist/producers Grey – comprised of brothers Kyle and Michael Trewartha – are known for their chart-topping style of pop music, blending crisp electronic production and infectious vocal melodies. Each amassing over 2 billion global streams, Grey’s viral hit singles “The Middle” and “Starving” introduced Grey to virtually every corner of the world. ​In 2016, RIAA Quadruple-Platinum song “Starving” with Hailee Steinfeld and Zedd reached #5 at the US Top 40 and was nominated for an AMA. ​​In 2018, “The Middle” – in collaboration with Zedd and Maren Morris– became a certified RIAA Triple-Platinum record, held the #1 spot on the US Top 40 charts for five consecutive weeks, and accumulated three GRAMMY nominations, two iHeart MusicAwards, a Billboard Music Award, and an AMA nomination. Grey has performed “The Middle” with collaborators Zedd and Marren Morris on The Billboard Music Awards and Ellen. Other notable releases include Camila Cabello collaboration “Crown” for Netflix’s ​Bright​ Original Motion Picture Soundtrack, and “Grey Area” featuring Disney starlet Sofia Carson. Now in 2020, Grey offers their most personal and genre-defying installment yet in the form of sibling EPs: ​LIGHT​ and ​DARK​. The project features vocals, writing, and production from the duo on every song, and represents a new and exciting phase for Grey.

“This time the music is really coming from us. It’s about our lives and our friends, the good and the bad.”