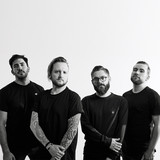 Relentless and Beautiful. “North German guys that speak with a North German tongue. Rough companions without question but touchable.” Andreas “Ando” Hildebrandt, responsible for the screams in WATCH OUT STAMPEDE, describes his band as a product of its heritage. And, of course, the album title refers to this circumstance, like guitarist Dennis Landt confirms: “The Northern Lights, that’s naturally us. We see ourselves as people from Bremen, as North Germans, as boys from the coast and we don’t to be anywhere else.” Ando adds: “The literal translation of the German term ‘Nordlichter’ comes from the fact that we people here like to describe ourselves as Northern Lights and as band we wonderfully correspond to this cliché. Polar lights are a beautiful but blatant opposite to the relentless environment of the northern countries. That’s how I see our album as well: It contrasts the extremes relentless and beautiful.” On their already fourth long-player, WATCH OUT STAMPEDE know exactly who they are and they want to express this fact. But ‘Northern Lights’ is a new start as well. The absolute will to outshine their past work as well as the production in Christoph Wieczorek’s Sawdust studios, push the album to a new, international level that is also stressed once more with the change to Redfield Records as their new label.