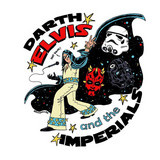 Darth Elvis and the Imperials

Darth Elvis & The Imperials are a Star Wars themed Elvis and rock n roll parody band from Viva Mos Eisley. In 1977 Elvis didn't die he turned to the Darkside of the Force and ever since he has been playing music venues around the Outer Rim Territory. The band performed for the first time at the Official Star Wars convention Celebration Europe back in 2007 and have been thrilling audiences ever since with their unique mixture of rock n roll, comedy & outlandish performances. They really must be seen to be believed. As seen at #Cantina #1Bash Sci Fi Weekender and Channel 5's How Star Wars Changed the World. #DarthElvis #Elvis #StarWars #StarWarsBand #Imperials #RocknRoll #Parody