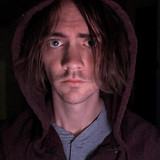 Dan Hauk is a singer-songwriter from Reading, PA. Dan has been writing music for over 15 years, almost as long as he has been playing guitar. Growing up on punk music of the 90s and early 2000s, he always had a weakness for acoustic versions of the high-energy style. After high school he began expanding his musical taste, taking big influence from acoustic and indie artists like Elliott Smith and Daniel Johnston. In addition to his solo music, Dan co-founded and plays in Chiseled Lilies as the guitarist and lead vocalist.