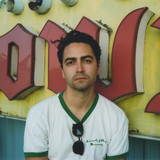 Altadore, the project of Portland, Oregon resident David Katz, released his second album Gardenia last month [April 24, 2020], showcasing an impressive progression in the songwriter’s musicianship. Playing and recording much of the record himself, Katz departs from the more somber feel of his first album – Opal, Luna, and Hymn (2016) – with an upbeat, 70s-inspired body of work composed of nine tunes. Still writing about the ways of the world, touching on universal themes of loss, love and confusion, Gardenia sees Katz skillfully and subtly flip the melancholic side of human existence around, finding an air of contentment and gratitude which, from the first track, is carried throughout the album in a warmth of instrumental and vocal layers; soothing in places, upbeat in others. - Caitríona Burke, n-eight.co.uk