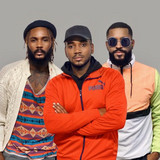 Carreira 3 is an Urban fusion trio based in London, United Kingdom. The band consists of 3 blood brothers, Jace, Alfredinho and Brandi Carreira. Representing Angola and Democratic Republic of Congo the band were formerly known internationally as Nicole Jane. They have toured across the World in Countries such as Russia, Germany, Japan, and Romania performing to a collective audience of over 5 million people. Carreira3 have also supported Ne-Yo, Lemar, Tiny Tempah, Ndubz, Timberland and many more on their UK tours. In 2019 Carreira 3 appeared on BBC1 hit show “ All Together Now” as judges alongside Geri Horner of the Spice Girls.