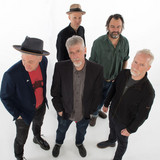 Lowest of the Low

Featuring Lowest of the Low

Lowest of the Low rose to prominence after the release of their 1991 debut album Shakespeare…My Butt -- 17 tracks of smart, spiky, socially conscious folk-rock that were assembled from character sketches and journal entries in Ron Hawkins' ever-present notebook as he wandered the streets of Toronto. The end result was an eloquent love letter to the city and its people. It's 2017 and they are back with a new album and a fresh attitude. "Do The Right Now" the 2017 album is a near-perfect embodiment of the Low’s evolution as a band. It’s got the clever wordplay, razor-sharp hooks, meaty riffs and airtight harmonies that permeate their back-catalogue, but also benefits from a broader sonic palette that can only come with experience and experimentation. It’s a thrilling natural progression of their insistent sound, and it manages to pull off a pretty sly, contradictory trick, too: it’s a modern treatise on living in the moment that simultaneously manages to take an over-the-shoulder glance at the group’s own past. The songs on Do The Right Now are united by a common, overarching theme: the importance of mindfulness, of being present in an age of distraction rather than fixating on the future or being a slave to your past. “Tomorrow’s a lie and yesterday’s gone,” as the title track asserts. The album encourages the carpe’ing of many diems, it also allows for you to sit back and listen to great album start to finish.