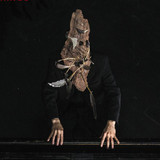 Kubikmaggi are an avant-jazz band. Since the artists' first collaboration in 2003, they have released three albums with Ulitka Records, itself run by nationally respected innovator Leonid Fedorov. With their influences including Igor Stravinsky, Sergey Kuryokhin, John Zorn, and John Medeski, Kubikmaggi tend naturally towards eclecticism. The trio are known for breaking musical forms based on several polar music styles. They might range from early jazz to baroque-classical motifs, from Russian folk to prog rock, and all within one piece. These shifts may occur very rapidly, almost abruptly, or flow naturally into one another. In similar ways, these musicians span stately Soviet film music and radical minimalism.