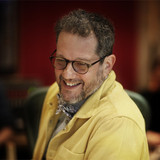 Composer Michael Giacchino (pronounced “Juh-key-no”) has credits that feature some of the most popular and acclaimed film projects in recent history, including The Incredibles, Coco, Jojo Rabbit, Ratatouille, Star Trek, Jurassic World, Rogue One: A Star Wars Story, Spider- Man: Homecoming and War for the Planet of the Apes. Giacchino’s 2009 score for the Pixar hit Up earned him an Oscar®, a Golden Globe®, the BAFTA, the Broadcast Film Critics’ Choice Award and two GRAMMY® Awards.

His music can be heard in concert halls internationally with all three Star Trek films, Ratatouille, Jurassic World, Up and Coco