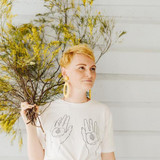 A wry sense of humor and an impossible amount of talent, the incredibly prolific Tara Simmons released two albums, three EPs and a handful of remixes in her short life before she passed away in 2019 at the age of 34. Since her debut EP in 2007, she remained an ambitious singer, songwriter, cellist, keys player and producer, yet despite the endless stream of music she created, she could not and would not sit still, she would

push against her natural pop sensibilities and opted for an alternate moniker that both stood out and fit in. Naturally, the project called CastleRays fashioned its own momentum - she toured as frontwoman and vocalist for electronic outfit YesYou and extended her live chops guesting on many a big stage alongside festival mainstays Rufus Du Sol. Meanwhile she watched material from her back catalogue take on a life of their own, garnering international radio play and solid television placements that would open the door to new followers. Naturally, the Tara Simmons sound of old - string-driven pop experimentation with field samples - started to creep back into her subconscious. She leaves the gift of a mighty legacy and a final album she had barely completed with musical partner Yanto Browning. Singles 'Acromotopsia', 'North' and 'Let's Go' have been released ahead of Tara's posthumous album release on 20 March 2020 - 'Show Me Spirit 'til the End'.