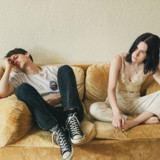 Hailing from NY, genre blending dream pop/rock outfit Laveda set nostalgic and cinematic moods with a 90's-esque sound reminiscent of The Sundays and my bloody valentine. Unlike popular bands of the shoegaze revival movement, Laveda maintain polished pop vocal performances similar to artists such as Beach House and Billie Eilish. Founding members Ali and Jake voice the concerns of today’s younger generation throughout their debut record “What Happens After”.   The band has played extensively in and around the New England and NYC area since early 2019. In March 2020 they toured down the East Coast (US) to make their debut at the famous indie music fest SXSW in Austin Texas (canceled due to COVID-19).   Laveda has earned praise early in their career from notable blogs such as Pitchfork (Elia Einhorn (Fashion Brigade

& The Scotland Yard Gospel Choir), David Dean Burkhart, CLOUT, Fadeawayradiate, Various Small Flames (UK) and more. NPR Music highlighted the band as one of their Top Shelf picks for the 2020 Tiny Desk Contest. Laveda most recently made their debut on Audiotree Live in September of 2020 (now on YouTube & streaming).   Currently the band is preparing to record their second full length album in LA. Their debut album “What Happens After" is out on all streaming platforms and vinyl is available for purchase at lavedaband.com