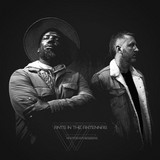 PhotoSynthesizers is a Hip-Hop Rock Duo out of Richmond, Va. The group consists of its co-founding members, Maurice "Barzencode" Osion (lyricist) and Josh Bryant (producer). Barz and Bryant's art alliance, rhyme-rock hybrid, began its synthesis when the two met through a local publication in the group's hometown. Barz and Bryant have remained the core of the group since its inception, but have surrounded themselves with a family of musicians for their live shows over the years. Barz multilayered rhyme schemes and Bryant's hard-hitting production of 808's, guitars, and synthesizers form the axis of their double helix of Hip-Hop and Rock, while other musical genres, such as electro, classical and jazz, form the cross-links that have created their signature sound. Beginning Friday, January 15, 2021, the group will follow up their 2019 debut LP, Apollogy, by dropping a series of short stories told through music and video, scaling up to their new project, The World's Fair. The first of these releases is "Ants In The Antennas," a

story about the group’s musical journey, told through the lens of the smallest being the strongest, often revered but not remembered