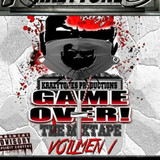 INGLEWOOD CITY, CALIFORNIA Born m.c. -- One glance across the hip-hop landscape reveals a myriad of gimmicks and gangsters, rhymes without reason and overblown bling. A sprinkling of real talent appears on the horizon every so often and KRAZYTONES is rising like the sun, ready to shine brighter than most. In his new video "pain is love" KRAZYTONES imparts his street-smarts to an underling like a hip-hop Pancho Villa in the back seat of a Roll Royce. He doesn't candy-coat the risks of rising to fame amid predators and haters. But KRAZYTONES conveys an acumen that can elevate his hip-hop prodigies without them having to compromise or sell their souls.Hes

not new to the game and can hold his own with the baddest male and female rappers who dare to pass him a mic. KRAZYTONES knows the power of his presence and is proving that he doesn't need to conform to be recognized and respected. His hunger for him craft is matched by his tenacity to be true to himself and his legion of fans. KRAZYTONES story is still unfolding and he draws on the tragedies that life brought into his childhood to create triumphs that ultimately define his artistry. His music is his mirror and his image defies stereotypes; his bold tattoos – bald headed chingon cyclone pelon is his natural style and bold stage presence compliment his convictions to stay true to himself and his fans- -KRAZYTONES