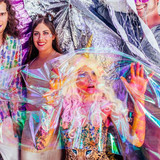 Moon Hammer is a kaleidoscopic supergroup of Denver musicians who are also cosmic bffs. We formed the group in 2017 after the relocation of Moon Magnet, Reed’s studio originally founded in the basement of an old Victorian house, which was demolished to make way for an evil villain’s secret lair. In those times we would all crowd into the garage, which doubles as a rocketship. There was a constant bustle there, a living thrum that permeates into our music: a beautiful flow of people coming and going, talking and laughing, having sudden ideas and then laying down tracks quickly before their Uber arrived, and of course the sacred saturnalia of Baba Pizza. When we create, the cast of characters is always shifting so that each track sports a different assortment of folx. Because of this, we consider each session a serendipitous thing; it could be any of us playing the Xylophone that day, or blessing the pizza, or holding their mouth open so the mic can pick up the sound of the Pop Rocks. We continue to create with gusto, and look forward to blasting off into a dazzling future of music, pizza, and bestfriendsforeverness. Moon Hammer is a