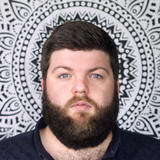 Performing regular shows since the age of 16 has given Tobias Robertson a wealth of experience in front of a range of audiences and left him with a calm and comfortable demeanour onstage. Having been asked to audition for The Voice UK 2016 after an appearance at a local open mic, Tobias appeared twice on the show. Performing Randy Newman's famous "You've Got A Friend In Me" from Disney's Toy Story secured a slot on Boy George's Team. After the show, Tobias has spent time since playing any show that came his way and honing his craft to be an adaptable and skilled entertainer. This culminated in being offered to support lead singer of M People, Heather Small on her April tour of the UK this year after Heather saw Tobias play in a small restaurant in Cardiff. Tobias has also been hoarding a stash of original material and playing the waiting game until the time is right to introduce the world to his own songs. September 16th 2019 sees the release of "Moving On", a self produced debut EP that reveals Tobias' sound, spanning from humble acoustic heartache to fully realised atmospheric wonderings.