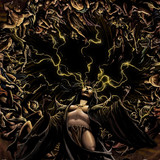 - VISCERA formed in early 2019. Viscera formed out of a love of all types of heavy music. To release the type of music they would want to listen to themselves. They are equally Inspired by the seminal 90's & 00's bands, notably Pantera, At The Gates and Killswitch Engage, as they are by bands like Necrophagist and Morbid Angel. Debut single 'Lamb to the Slaughter' was released on Oct 29th 2019. Follow up singles 'Obsidian', 'Immersed in Ire' and 'Delilah' followed, resulting in multiple playlist additions across digital platforms. Shortly after announcing the FACES OF DEATH TOUR with Decapitated, Beyond Creation, Ingested and Lorna Shore, across the UK and Europe in March 2020, Viscera's debut album 'Obsidian' was released 6th March 2020 via Unique Leader Records to critical acclaim. 2020 will be the year VISCERA make their indelible mark on heavy music.