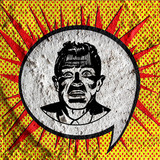 When The Roland High Life first started playing together in Boston in the mid-00s, the band had bonded over their scrappy emo/punk upbringings. As working class New England kids, they'd all played in bands from ska to folk-punk to hardcore. As a brand new indie rock band, they aspired to marry those sounds with the mature literary songwriting of artists like Warren Zevon, Elvis Costello, and Jeff Tweedy. That mix of high- and low-culture drove the DIY sound behind the band's debut EP, If You Really Want to Hear About It... (10 Year Anniversary Reissue). It also lead to the ten-year gap before the band released their next album, Another Other Dorset. The band still played together in those intervening years, honing their songwriting craft and Springsteenian pop-punk sound. But the chaos of adulthood had scattered them across the country, forcing the band to take a backseat. With their newest album, Songs About Comic Books and Mid-30s Malaise, The Roland High Life has finally come full circle. The songwriting is sharper, using pop poetry to navigate the struggles of adulthood, while also looking backwards towards that nostalgic hope of comic books and youth. The production is more polished, too, with bigger sounds and more harmonies; yet it was all recorded in their mothers' basements and childhood bedrooms, keeping with the theme of the album. Forwards and backwards. High- and low-brow. Welcome to The Roland High Life.