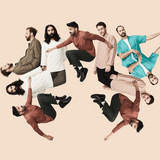 Los Angeles quintet Young the Giant expertly juxtapose their adventurous spirit with fearless grace on their new album, Mirror Master. Featuring their new single “Superposition,” the band’s fourth studio LP follows 2016's critically acclaimed Home of the Strange. "Superposition" is a love song at its core, serving as a nod to the special people you meet and the decisions that brought you together. Finding power in simplicity, Young The Giant masterfully balance purposeful arrangements with complex thoughts about fate, hope, and the spaces in between. Young the Giant first broke through with their 2010 self-titled debut album, which featured the RIAA-gold certified hits, "My Body" and "Cough Syrup." This was followed by the release of 2014’s Mind Over Matter, which was both a commercial and critical success. Young the Giant continued to brave new themes and sonic landscapes with their wildly adventurous third album, Home of the Strange. Young the Giant has sold out performances at historic venues such as Radio City Music Hall, The Greek Theatre in Los Angeles, The Aragon Ballroom in Chicago, Red Rocks Amphitheater in Morrison, and more. They have become a festival mainstay at high profile outings such as Bonnaroo, Austin City Limits, Lollapalooza, Outside Lands, and Governor's Ball among others.