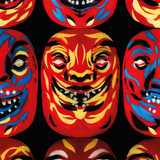 “In these days of homogenised, digital recordings lacking in any individual sound or identity it is most encouraging to hear something so truly original… most refreshing”. David Rodigan MBE Resonators are without a doubt one of the most powerful and highly regarded dub outfits in the UK, taking all the influences of original Jamaican sounds and riddims, and bringing it forward into the sounds of here and now. Their debut album for Wah Wah 45s, The Constant, was released in late 2012 to huge critical acclaim, earning them the moniker of “British reggae at its best” from none other than the UK’s godfather of the genre David Rodigan. Four years later, the band released their second long-player on the label, Imaginary People, an album that once again garnered love from Rodigan, as well as BBC 6Music’s Gideon Coe and Huey Morgan, Clash Magazine, ColoRising and Echoes mag’s reggae luminary John Masouri. With a plethora of new songs under their belt and a couple of EPs to be released in 2018, as well as what’s becoming a very healthy catalogue of crowd-pleasers from their last two albums, Resonators are touring the UK and Europe throughout next spring and summer. Make sure you catch them as they’re one of the finest live acts in this country right now!