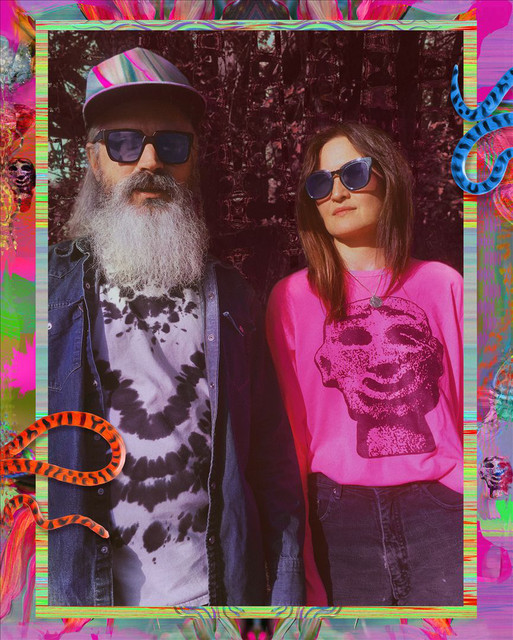 San Francisco's Moon Duo are a psychedelic band with chilly electronic underpinnings and drones inspired by Spacemen 3, Silver Apples, and Suicide. Made up of the duo of guitarist Ripley Johnson (of Wooden Shjips) and keyboardist Sanae Yamada, the template on their initial recordings pairs churning distorted guitars, shared vocals, and pulsing organ over machine-driven motorik rhythms. It sounded honed to perfection early on with albums like their debut, Escape, and especially 2011's Mazes, where they began writing songs with sharp hooks. They took liberties with their established sound at various points, adding a drummer (John Jeffrey), dense sonic textures, and rambling experimentalism (especially on 2017's pair of albums titled Occult Architecture). The most drastic change came with 2019's Stars Are the Light, which stripped back the guitars and added soft disco and shiny electronics to their sound. The duo of Johnson and Yamada started playing in 2009 and began issuing releases in short order, including the Love on the Sea 12" on Sick Thirst, which they followed with the Killing Time EP on Sacred Bones. Moon Duo made the jump to Woodsist for 2010's full-length Escape, which offered the most expansive and melodic take on their trippy sounds yet. After touring nearly incessantly following that release, Moon Duo moved their operation to the Souterrain Transmissions imprint in Berlin for Mazes later in the year, recording the set at home in San Francisco and mixing it in Germany. The album, released in the spring of 2011, followed widely acclaimed performances at SXSW; the band's sound on that record focused more on tightly written (and brightly produced) songs with fixed drum machine-made motorik rhythms. The set also got the remix treatment later in the year with participation from Psychic Ills, Purling Hiss, and Sonic Boom, to name a few. Moon Duo's next full-length, Circles, appeared in the fall of 2012 on Sacred Bones and was accompanied by a remix album (Circles Remixed) the following year, with the album's tracks reworked by artists like Eric Copeland and Umberto. The band's release of stopgap material continued in 2014 with the live album Live in Ravenna, which featured drummer John Jeffrey. After moving their home base to Portland and with Jeffrey on board, the trio began recording their next album in a self-described dark basement. Mixed again in Germany by Jonas Verwijnen, 2015's Shadow of the Sun was the group's densest, most psychedelic record to date. At the end of the year, the band embarked on a lengthy European tour, then returned again in 2016 for more dates. Once they were back home in Portland, Moon Duo began work on their next album, both at home and at the Type Foundry. Occult Architecture, Vol. 1 was released in early 2017, then Occult Architecture, Vol. 2 followed soon after. The first volume was intended to represent yin and the second volume yang, in an effort to explore both light and darkness within their sound. Johnson and Yamada spent the next year working on outside projects. Johnson reunited with Wooden Shjips, who released V. in 2018, and Yamada started a solo project called Vive la Void and issued a self-titled record on Sacred Bones. When the duo (plus Jeffrey on drums again) reconvened, their sound had changed dramatically. The band added elements of slinky disco, shimmering Madchester, and electronic trippery while cutting back on the motorik rhythms and guitar overload. They recorded an album at Jackpot! Recording Studio in Portland and at home, then had the results mixed by Sonic Boom for extra psychedelic credit. Stars Are the Light is the band's seventh record; it was released by Sacred Bones in September of 2019. ~ Heather Phares, Rovi