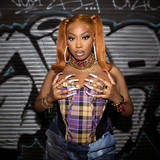 The world of hip-hop tells women that they should make themselves smaller in order to survive. That, in order to reach the game’s top tier, they have to discredit every other girl running alongside them. A razor-sharp rhymer who focuses on her own work first, rapper Ms Banks doesn’t believe in that bull****. The cocky alter ego of a 26-year-old South Londoner, she’s made it her M.O. to sidestep unnecessary drama. Instead, her penchant for wordplay and earworm melodies has made her a jewel in the crown of contemporary British hip-hop.