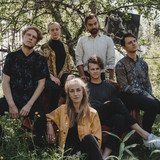 RÅNDA is fueled and united by a vision to keep traditions alive and close at hand, yet evolving, moving and ever growing. With a goal to break down barriers and to cross borders, the six members builds a bridge between the modern music scene and the passion that they share. RÅNDA originates from Dalarna, Sweden and was formed in 2012 by leadsinger and guitarist Simon Vågbratt, Sol Magnus Laggar (banjo/vocals), Erik Backlund (Bass) and Mia Börjes Björklund (accordion/vocals), as a project to simply make time go by in the otherwise still and solitary community where they grew up. Quickly the members found and formed their folk inspired sound and RÅNDA started to grow fast, and in 2015 the decision to let the band really flourish was made. Jonathan Jobs was introduced on drums/percussion/vocals, and later Alice Evensen Landström (violin/vocals) joined the band to form what now is RÅNDA.