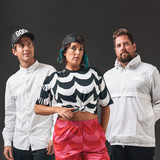 GoodLuck is a live electronic band from Cape Town, South Africa. While their genre-bending sound is rooted in the rhythms of their homeland, GoodLuck’s sonic style is defined by a modern electronic edge with international crossover appeal. GoodLuck’s high-energy live shows are redefining the possibilities of live electronics and reviving proper songwriting and storytelling in electronic music. Their pioneering tech setup (drum machines/synthesizers/electronic percussions/saxophone/vocals) allows them space for improvisation and instrumentation in each unique performance. GoodLuck have amassed nine #1 radio hits in South Africa; certified iTunes hits in Europe (with “Taking It Easy”); more than 500 performances around the world; and massive streaming numbers (+15 million/Spotify and +12 million/YouTube). The band’s first international release, “Back in the Day” (Armada Music), exploded on Spotify, while their breakout track “I’ve Been Thinking About You” (Ultra Music) became an international hit. The latter reached #1 on radio charts across South Africa and became the most played song across all Top 40 stations in the country. Their recent single “Be Yourself,” released on the band’s own Get Lucky Records, has received major radio support across Europe. Their newest track, “Chasing Dreams” (Armada Music), is a sonic dreamscape built on upbeat melodies and empowering lyrics. www.goodlucklive.com —John Ochoa, October 2018