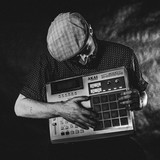 is the fifth full-length material that will enrich the music catalog of this experienced and respected producer and DJ. The newest album contains 21 compositions, splitted into several thematic blocks, which sometimes may bring back a DJ mix. Through many compositions, Hubert wants to sum up his several years adventure with music and to shows sounds which influenced during his artistic path. [BIO] Hubert Tas is an awarded DJ, and music producer, who has been on stage for more than fifteen years. His main accomplishments are: Vice-Championship (in 2011) and 2nd Vice-Championship (in 2016) in Show category at IDA World DJ Championships. For the last ten years, Hubert has been teaching music production and turntablism at various events around the Globe. Moreover, he shared his experience at workshops located in Poland, Ukraine, Russia and Taiwan. Hubert is also a recording musician - before