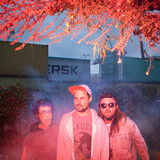 A contemporary jazz with mixed influences, focused on overall cohesion rather than individual virtuosity; this is what Montreal based trio Misc aim for. If the musicians hail from the jazz tradition they are clearly not limited to it, flirting mainly with pop, rock and electronic music and using a wide range of effects, sampled field recordings and orchestration tricks throughout their work. Their eponym album released in 2016 got nominated for Jazz Album of the Year in both Quebec’s ADISQ Gala and the independent music “GAMIQ” gala, winning the latter. The album led to a 80-date tour across Canada and Europe. Three years later, Misc is working on a new album recorded in their own private studio in Montreal. With these compositions that are firmly anchored in an era of doubt and a tempestuous social context, the young trio continues its exploration and blurs the boundaries between the musical genres to a greater extent than they have ever done before. With the eagerly awaited "Partager l'ambulance", Misc hits the bull's eye, offering a strong album that is both timeless and surprising.