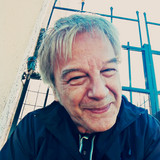 When I was a kid I kept listening to the singles my elder sister brought home and tried to sing out Beatles' songs and what have you!I knew deep inside me that one day I would pick up the mike and play with a rocknroll band! As a student when I took English Literature,I started learning my first guitar chords,spending hours and hours listening to records.Writing my first song was not an easy thing to do.It dawned on me one day when I was heartbroken and from then on it felt a lot easier to sit down to it and write my first bunch of songs.Their release took place after some yrs though because in Greece the general atmosphere did not make allowances for the style of music I was prone to.Better late than never!Now after so many yrs I am proud to say that I have been releasing until this very day my music the way I want to as I always dreamed of.