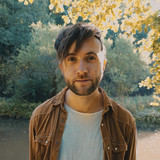 Swedish singer/songwriter Simon Alexander emerged in 2017, breathing new air into the modern folk scene with his profound lyrics and heartfelt melodies, getting comparisons to Matt Corby and Dylan LeBlanc After gaining quick recognition he was signed to record label Rehn Music Group in 2018. The following years have contained several acclaimed releases, big features in influential music blogs and magazines, and touring various parts of Scandinavia, with prominent shows on SPOT Festival, Live at Heart, Lost In Music among others. The long awaited debut album A Place to Call Home was finally released in September, 2020. ”A home to me is wherever you want it to be. It’s where you feel that you belong and can find peace. With this album I wanted to give a small piece of me, a personal reflection on different situations throughout my life where I’ve either been in search for something, or have found a place that I call home". The sophomore album Riverine was released in November, 2020. A collection of studio recordings from over the years. From the first EP Won't Be Found , through In the Rust, to the new songs Ocean and the title-track Riverine. ”All of these songs holds so many beloved memories of times with the talented people

that have been with me on these recordings and supported me during these years. So it feels like a perfect way to end this chapter by letting these songs be together as one, and look forward to start the next one.”