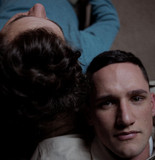 After years of collecting dust, the words of singer-songwriter Christian Ohly and sounds of producer John Katona have been realized on Hugshake, the pair's first EP as Bird Fight.   The five-song EP, which swells with relatable — yet deeply personal — lyrics about doubt, togetherness, and other rich imagery against a painterly electronic landscape, came together during the pandemic but had existed, in some form or another, long before. Katona had composed much of the EP nearly a decade ago using instruments and percussive objects (pens, mugs, and cigar cutters, to name a few) but was hesitant to release the project as he hadn't found the right vocalist.   The music, all recorded pre-pandemic, sat untouched until the pandemic, which is when Katona and Ohly began collaborating on mixing and editing through email. When the pandemic eased up last summer, the two added some synth looping and recorded a few performance videos.  As for the EP, which was admittedly cathartic for both Katona and Ohly, Bird Fight hopes that listeners take a moment to interpret and relate to Hugshake in their own way. “The lyrics are about personal things to us, but I think they're displaying the same feeling many others are going through with the strange year we've had. There are highs and lows that the lyrics and music cohesively construct. I hope listeners will turn to it during their highs and lows and, in some way, remember we're in this together.” - Jerilyn Jordan, Detroit Metro Times Feb. 2021