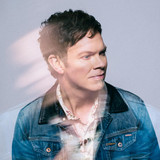 With a heart for connecting with others, Contemporary Christian singer-songwriter Jason Gray is known for the compassionate honesty and authenticity he offers through his music. Through this vulnerability, Gray has consistently reached listeners in a unique and compelling way, reflected in each of his projects. His latest album, 2016’s Where The Light Gets In, debuted in the Top 5 of Billboard’s Top Christian Albums Chart. This follows the success of 2014 album Love Will Have The Final Word, which produced Gray’s first No. 1 AC radio hit “With Every Act of Love” – also a Billboard Christian Airplay Top 10 track.

With his early records A Way To See In The Dark and Everything Sad Is Coming Untrue, he had five Top 5 singles in a row, including the No. 1 (inspo) radio single “Nothing Is Wasted.” Gray has won two ASCAP Performance Awards, for “Most Like Falling In Love” and “Good To Be Alive.” With previous tour experiences alongside Michael W. Smith, Steven Curtis Chapman, Third Day, TobyMac, and numerous other CCM artists, Gray has also headlined tours of his own, bringing each audience thoughtful inspiration through music and stories. Those listening to or watching Gray experience not only his musical talent, but the heartfelt way he shares his gifts to support others.