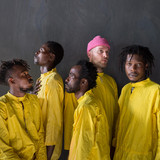 A wind of change is blowing over the cultural landscape of Kinshasa. An amazing alternative scene is thriving that can’t just be defined or looked at with a western eye as “african music” and even less “world music”… it is explosive and vibrant. These sounds are emanating from the ghetto and downtown clubs in between the Governments imposed power cuts. The artists actually bring something alive, strong new ideas with DIY constructed instruments with a powerful and unique drive. This movement is more expressive, lively and direct compared to most big cities’ scenes, like NYC, London, Berlin… It’s raw and free like NYC in the 70’s and 80’s or Berlin in the 90’s, it’s inventing everything from nothing and it’s happening now. La Belle Kinoise production have been working in Kinshasa with musicians since 2004. The KOKOKO! project was born from a change in mentality and a radicalisation of the people, which we’ve witnessed with our own eyes. With the constant degradation of quality of life, Kinshasa’s youth began to question the taboo of ‘respect for one’s elders’ – denouncing the state of a society paralysed by fear. This spirit of protest is something entirely new. KOKOKO! is the soundtrack of Kinshasa’s tomorrow.