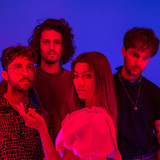 The four-piece Dutch pop band RONDÉ immediately broke through in 2014 with their first single Run. It turned out to be the start of a succession of highlights for the band. We are now seven years later, several hits and performances at prestigious festivals such as Lowlands, Concert at SEA and Appelpop and the band has become an integral part of the Dutch stages and radio. At the end of 2020, the foursome came up with the surprising pop songs 'Get To You' & 'Real Feelings' which have already been streamed millions of times. It shows that after 7 years RONDÉ is still a pop force to be reckoned with their new single ‘Hard To Say Goodbye’. With airplay on all national Dutch radio stations, big TV performances, accumulating over 800.000 monthly listeners on Spotify and having over 4 million streams in