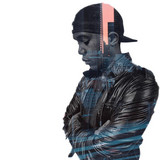 Zack Olinger (@zackolinger) is an American singer-songwriter and recording artist.   A pop music newcomer, Zack Olinger is a self-described ‘social justice music maker’. In the wake of the social justice movement which was sparked by the death of George Floyd, Zack realized that “enough was enough” in reference to his insecurities about releasing his work.   “It’s time to put some music out there. I have hundreds of songs, but I never really had the courage to be judged by my work. I’m still a perfectionist since I record, mix, produce, write, and compose everything that I make so in the past it has been emotionally impossible to release my music. Now with everything that’s going on, I’m not making music for just me, I’m making social justice music everyone in this movement. I can’t morally keep my music to myself. There’s someone out there that will love it”.   Expect more music in the future from his back-log of compositions.