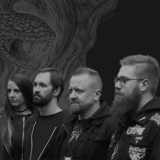 Born from the ashes of a dead band: German based „Funeral Pile“ was originally founded in 2008, but the band was put on hold after some band members left their hometown for their studies. Ten years later three members of the original line up crossed paths again. They still shared the love to metal music and there was this powerful, constructive atmosphere again as soon as they jammed together. Finally Martin (The Course is Black, Ex-Pikes Edge, Waldgeflüster Live musician) joined the band. He was the missing piece of the puzzle to breathe life into their new sound. A sound which is not restricted to one genre. The variety of musical influences on the different band members let them create their own kind of metal music, ranging between Black, Death and Doom Metal with melodic riffs.