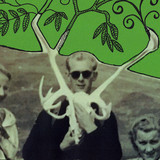 The High Water Marks formed in 2003 when Hilarie Sidney (The Apples in Stereo, Elephant 6-Co-Founder) and Per Ole Bratset (Palermo) met in Oslo after an Apples concert. The band has two official albums, Songs About the Ocean (2004) and Polar (2007) In 2019, the band re-released Polar on vinyl and Songs About the Ocean on streaming for the first time. The High Water Marks are back after a long hiatus with a new album, Ecstasy Rhymes. The album is slated to be released on the 20th of November, 2020 on Minty Fresh Records. It was recorded between May of 2019 and June of 2020 with bandmates, Øystein Megård and Logan Miller between continents spanning from Sadieville, Kentucky, Trondheim Norway, and Grøa Norway. The High Water Marks’ Ecstasy Rhymes is a 39 minute journey through pop hooks, orchestral mellotrons, and catchy riffs, sure to please listeners of indie rock, indie pop music, The High Water Mark’s fans, fans of the Apples in Stereo, and the Elephant 6 collective among others. This is the bands’ best effort yet, encompassing all of the elements that are associated with the first two albums, all the while building on that sound to take it to a new level. Perhaps living in one of the world’s happiest countries, maybe the fresh salty air streaming in from the North Sea, or the access to socialized medicine has had its effect on the band, but whatever it is has had a magical effect on the band and the result is encompassed on the inspired Ecstasy Rhymes.