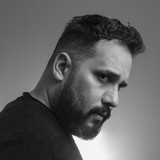 Born in Maracaibo (Venezuela) Jesús Romero aka Gzaz, began to listen and collect music since he was 11 years old at the age of 16, he began to play in local bands. In 2009 he released his debut album as a producer ¨Balcón¨, with which he won the “Premio cafe imperial a la musica“ sponsored by a private company, and his single ¨Sea Excelente¨ was included in the Mercedes Benz mixtape # 31. The singles ¨Sea Excelente¨ and ¨Dulce y Amargo¨ were used in several advertising spots of articles ranging from magazines to footwear. The ¨Sea Excelente¨ video is directed by the visual artist Javier Farias and was censored for have "unfriendly for the family" content In 2012 he decided to move to Buenos Aires where he currently resides, his first record from Argentina was ¨Casa¨. In this album different Venezuelan artists who live in Argentina and who are part of the Venezuelan diaspora collaborated, this record is dedicated and conceived thanks to the diaspora of the venezuelan regime From this album comes the simgle ¨Creo¨ and his video was directed and recorded in NYC by visual artist Carlos Henriquez In 2016 and after overcoming certain personal difficulties ¨Sali a very that as its name says it is an album more upbeat and optimistic than its predecessor. Shortly after being edited his grandmother dies in Venezuela and not being able to go to say goodbye to her product of the regime, decides not to do any promotion of it. For more info: www.gzaz.tv