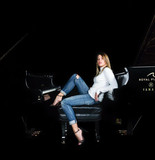 According to “Marca España” (Global Spain), María Dolores Gaitán is one of the most outstanding Spanish pianists in Europe. She has been distinguished for her work of artistic quality as a representative of Spanish talent at an international level, opening a crucial cultural import and export channel through music. Born in Villa del Río (Córdoba, Spain), she has been internationally praised for her energy and personality interpreting on stage and chosen by the European Union National Institutes for Culture (EUNIC) as a representative of Spanish musical culture in Italy. She has also been nominated as a candidate for the Princess of Girona Awards in 2018, winning the CHALLENGE of the cultural enterprise proposed by this foundation with her 3Tú project. María Dolores is moved by an almost countercultural goal in the times when so much hollow music floods society: to strengthen the classical music scene to bring it closer to the public with concerts held in usual places. In this process, she has become the first pianist to play in the four Unesco Patrimonies of the city of Córdoba. Her eagerness to renew the current musical panorama, to innovate and create new musical concepts, has led her to position herself as a prominent activist in cultural management. Thus, in 2010 she founded the Guadalquivir International Piano Festival (www.guadalquivirpianistico.org), a musical event she has directed since then and which has venues such as the cities of Villa del Río, Córdoba and Milan