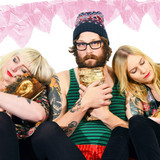 Lava Bangs are an indie/punk/alternative trio from Gothenburg, Sweden. Some compares us to Yeah Yeah Yeahs, some to Bikini Kill, but most can’t compare us to anything else. The energy of punk rock is mixed with intriguing melodies and strong vocals and polished just right. We are an energetic and furocious live act and we love to play live! As a band we’ve been around since 2010. We started out as The Volcano and in 2014 David entered the band and for different reasons we decided to change our name to Lava Bangs. Still the same awesome music though, maybe even better. As The Volcano we’ve released two EPs (The Volcano 2010 and Me Me Me 2012) and were featured on the punk compilation Turist i Tillvaron vol. 5 and the U.S compilation Girls With Guitars. In 2014 we started to cooperate with producer Henryk Lipp (Blue For Two, Thåström, Håkan Hellström) and in 2015 we recorded our debut album Quit Continue at Music-A-Matic studio in Gothenburg Sweden. Quit Continue was released March 4, 2016 and Lava Bangs are now ready to take on the world!