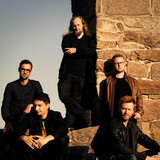 We are proud to announce that we have just released an EP, which is called «Event Horizon». It consists of two songs, Event Horizon pt. I and II. The songs are musically and lyrically connected, together creating a 15 minute prog opus. The EP was recorded at Noroff studio in Oslo, and mixed and mastered by the legendary Billy Anderson (Neurosis, Sleep, Agalloch). We wanted the end product to have a raw and unpolished sound, which we feel Billy managed to maintain and enhance with his mixing. This is our first proper release since our debut album, The Binding Cycle, which we recorded in the summer of 2011. We have since then been working on songs for the band, that we plan on recording and releasing, starting with this EP. This EP marks a couple of changes for The Fallen Divine. We have gotten a new marvelous drummer and lyricist, Georg Alver, after Alex Stebbing sadly decided to leave the band. Another change is that Christoffer and Magnus H have swapped instruments, meaning Chris now plays the guitar and Magnus plays the bass. We are proud of this piece of work, and hope you will give it a proper listen. Put on your best pair of headphones, or blast it on your speakers. Enjoy!