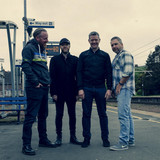 Paul Henry Smith met Greg McSorley, together they formed a band. Pabs knew a guy who could play drums, Derek Menmuir. Greg knew a guitarist, Stewart McCairney. Weird was born. In February 1995 Weird wrote their first album, Whapper Stormer, 25 years later they would release their 9th. 1998’s Firkin Outburst emerged, Weird’s music was only relevant to the loyal crowd that followed them. By the year 2000 the fun was gone. The band would meet every Wednesday to record songs onto a four track. The tapes piled up; eventually they were mixed. From this mess emerged Cold Homestreet, the band split. In 2003 Stu, by chance, met Pabs. Derek and Greg heard that the duo were recording and asked to hear what had been recorded. The band reformed. The enthusiasm was back; 2004’s One More Solo was born. 2007 saw Riot Act emerge. In 2008

Weird headed off to Gairloch to record their 6th record Quiet Act, a beautifully subtle album that paved the way for their biggest chapter. In 2009 a dear friend and superfan Dave Broon tragically lost his life. Weird Decibels rose from this despair. Dave was a huge AC/DC fan, the next album would have to be loud…it was. In 2011 Weird Decibels 1 went worldwide, their music videos reached thousands. In 2016 Weird Decibels 2 met with an emphatic response. The superb Everyday Heroes EP launched in 2018. In 2019 saw the live acoustic album Its A Grand Day Out. On their 25th anniversary the celebrated by releasing 2020s stunner February. photography K Byrne