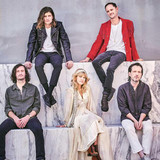 Streets of Laredo are a seven-piece indie folk outfit formed by siblings Daniel, Dave, and Sarahjane Gibson in Auckland, New Zealand. After playing just one hometown show, the Gibsons took a leap of faith and in 2012 they relocated to Brooklyn, New York, where they expanded their lineup to include fellow Kiwi Thom Darlow and local Brooklyners Sean McMahon and Andrew McGovern. Straddling the ever blurring lines between indie folk and pop, they rely on big group harmonies and an Americana-inspired sound full of stomping percussion, acoustic and electric guitars, harmonica, horns, and other assorted instruments, putting them in a similar league with acts like Edward Sharpe, the Delta Spirit, and the Lumineers. A trip back to Auckland yielded a pair of EPs that they released in 2014, packaged together under the title Volume I & II. ~ Timothy Monger, Rovi