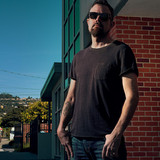 Jesse Brewster is a roots-music Renaissance man: a singer/songwriter, producer, and multi-instrumentalist who's spent the better part of two decades sharpening his personal brand of West Coast Americana. It's a sound inspired not only by his own experiences — including the hippie childhood he spent moving between homes in California and Hawaii, as well as the life-saving kidney transplant he received from his wife during adulthood — but also the experiences of those around him. The result is a mix of autobiographical lyrics, character-driven story-telling, gentle folk songs, heartland country-rockers, and guitar-slinging barn-burners. With support from everyone from CNN (who utilized his song "My Great Escape" for the network's coverage of the 2012 U.S. Presidential campaign) to San Francisco's iconic radio station KFOG, he continues to tell his story with The Lonely Pines, an album that occupies the middle ground between folk music and jangling, anthemic rock & roll.