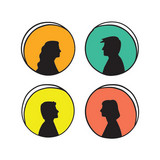 We'll be releasing our fifth full-length album, Fantasizer, on Oct 6! • We formed in Boston in the summer of 1999, a time and place where electropop bands were exceedingly rare. • Released two homemade EPs, built a website, animated a video (these things were BIG deals back then, and it even got us a writeup in Wired for our DIY-meets-techy-goodness aesthetic). • Our debut album, 2000’s Freezepop Forever, was released domestically on our own label, Archenemy, and licensed in Europe by the Spanish indiepop label Elefant. • In 2004, put out our sophomore album, Fancy Ultra•Fresh. • In 2008, after eight years of self-releasing our music, we partnered with Rykodisc/ Cordless Recordings for our third album, Future Future Future Perfect, and the single “Less Talk More Rokk” was the iTunes #4 dance/electronic song that year. •

The label experiment was cool, but we decided to return to self-releasing for our next album, Imaginary Friends, which received Best Album honors in the 2011 Boston Phoenix/WFNX Best Music Poll & Best Electronic Act in the 2011 Boston Music Awards. • We’ve been in a ton of video games, including cult favorites Frequency and Amplitude, and the massively popular Guitar Hero series, Rock Band, and Dance Dance Revolution. • Our tracks have been featured on TV shows ranging all the way from PBS kids’ series Arthur to The L Word. • We and our keytars have played a great many shows over the years. We’ve hit 4 continents, and even got to play at NASA once.