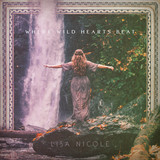 Canadian country artist Lisa Nicole is thrilled to share the release of her new single, “Gypsy Girl” in lead up to the release of her first full-length album, “Where Wild Hearts Beat” on August 13th. Lisa Nicole says, “For me, this song embodies a free-spirited soul who lives for spontaneous adventure and the life experiences that come with that. It could be a road trip with your bestie or a solo move to a new country. If it starts in your spirit, it’s worth pursuing, and you’ll be rewarded.” The liberated heart of “Gypsy Girl” also mirrors the Castlegar, British Columbia-raised artist’s own serendipitous adventure that led to the recording of the album, “Where Wild Hearts Beat”. A 2017 songwriting trip in Nashville put Lisa Nicole on stage with Keith Urban at a pop-up concert for a spontaneous duet, which inspired the artist to move to Music City for most of 2018. During that time, she connected with writers like Barton, White, and one of Urban’s own trusted writers, Dave Pahanish to write a treasure trove of new material. “This album represents my legacy project with all of my heart and soul put into it. Even so – more than anything else, I hope it inspires everyone to follow their own hearts and creative souls. If I’ve learned anything over the past 18 months, it’s that the very unpredictable journey of life is more important than any destination. Life changes in an instant and it’s impossible