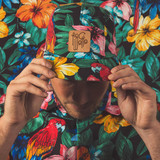 Predominantly known for his work as an emcee, producer and pivotal member of Perth hip-hop group The Stoops, Roc is on the cusp of releasing his first solo EP which aims to explore new ground as an artist and uncover his own personal identity within the music industry. Roc Walla proves a long list of musical accomplishments including the most recent release 'Middle Of A Riot' which is currently being played on Triple J. Roc Walla has also gained notable attention as a member of Lo&amp;Behold, alongside producer/emcee Creed Birch and vocalist Sarah Pellicano. In 2013 their widely praised single One Way Ticket provided the group a place in one of Australia’s most coveted festivals - Breakfest. With just over 10 years of performing and recording under his belt, Roc Walla has collaborated with a wide range of premier Australian artists such as Ta-Ku, J Squared, Georgie Kay, and Meg Mac. To date, Roc Walla’s achievements alongside Stoop bandmates Pronto and Arms In Motion have lead to some impressive international support roles including Pete Rock, Kurtis Blow, Mac Miller, The Herd, and most recently, Jurassic 5. A 2014 performance at Perth’s TEDx event alongside bandmate Sarah Pellicano gave Roc a rare and incredible opportunity to showcase his skills to a massive world-wide audience. Roc Walla pricked many ears with the release of Sunny Disposition, and more recently his self produced single Ships In The Night (both receiving very positive support and airplay from Triple J).