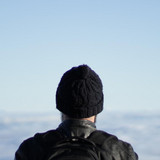 Slowburner is the most recent project of Élvio Rodrigues, composer and producer from Madeira island, now based in Lisbon, Portugal. In spite of being a player of multiple instruments, since 2015 Élvio has been experimenting with piano, field recordings and ambient soundscapes. The result is embodied in Slowburner's debut EP - Before I Return To Dust - which was self-released in digital and CD formats on March 14th 2017. In 2018, Élvio challenged himself to explore the piano more, having created for that effect a project named "Sunday mornings are for piano", on which during 10 weeks he composed 10 songs which he played live on Instagram, one each week. Those 10 songs were then re-recorded and were self-released in a CD Collection named 'Sunday mornings are for piano' in June 7th 2019.